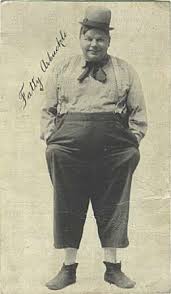 In 1921, Roscoe "Fatty" Arbuckle was one of the highest paid men in Hollywood. But on September 5 of that year, Arbuckle's life took a horrible turn nobody could have predicted. An aspiring actress, 25-year-old Virginia Rappe (pronounced ra-pay), took ill under strange circumstances at a weekend party Arbuckle was holding at a San Francisco hotel. Four days later, she was dead.

Arbuckle stood trial three times for Virginia's death. Two of the trials ended with hung juries. The third brought an unprecedented apology from the jury:

"Acquittal is not enough for Roscoe Arbuckle. We feel that a great injustice has been done him ... there was not the slightest proof adduced to connect him in any way with the commission of a crime. He was manly throughout the case and told a straightforward story which we all believe. We wish him success and hope that the American people will take the judgement of fourteen men and women that Roscoe Arbuckle is entirely innocent and free from all blame."

Arbuckle had done nothing to harm the girl. He was accused of murder by one Maude Delmont, aka "Madame Black." Delmont ran a blackmail scam, in which she'd provide young women to entertain men at Hollywood parties. A girl would claim that she was raped by some prominent man, who would then pay off Delmont to keep quiet. Delmont's story was so outrageous -- as was her character -- the prosecutors never called her as a witness.

But Arbuckle's name had already been dragged through the mud. The stories of bootleg liquor and wild women had done their damage. Arbuckle was banned from the screen. Although the ban was lifted in December of 1922, Arbuckle's career never recovered. He died of a heart attack in 1933, just as he was starting to recover financially and personally from his ordeal.

The allegations varied: that Arbuckle had raped Virginia, rupturing her insides with his 266-pound weight; that he was drunk and impotent and therefore angrily violated the girl with a wine bottle, or a Coke bottle, or a jagged piece of ice.

The booze-addled party-goers were not very consistent sources of information about exactly what happened. What is agreed upon is that Virginia stumbled into a bathroom at some point on Monday. Arbuckle followed her. He later said that he found her hunched over the toilet, vomiting and in pain. He moved her to his bed, where he hoped she would sleep it off. He then rejoined the party.

Virginia's condition deteriorated. At some point, she became hysterical, screaming that she was dying and tearing her clothes off. Arbuckle and Delmont argued over what to do next. The drunken party guests eventually decided to put the nude Virginia into a bathtub of ice water. Some reports have Arbuckle placing a piece of ice near or in Virginia's vagina, which may have contributed to the claim that he'd injured her insides with a sharp piece of ice.

Of course, this did nothing to help Virginia, who continued to scream. Arbuckle carried her to another room and summoned doctors. The guests, thinking Virginia was just hung over, continued to party. 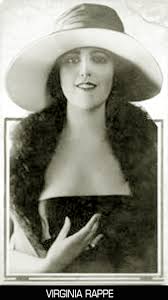 Virginia was not taken to a hospital until Thursday. She taken not to a regular hospital, but to Wakefield Sanitorium, a maternity hospital known for performing quasi-legal abortions. Virginia died the next day, Friday, September 9. The cause of death was listed as peritonitis due to a ruptured bladder due to "external force."

The next day, Arbuckle was charged.

Arbuckle's defense attorney brought forth Josephine Roth, who testified that Virginia had five times availed her self of services at Roth's clinic: four times for abortions, and once to give birth to a baby. This information might seem to be unnecessarily slamming the victim, but turns out to be very relevant.

Although Virginia's ruptured bladder was produced as evidence in the trial, her reproductive organs had vanished after the autopsy. The autopsy was performed illegally on site at Wakefield Sanitorium, without consulting the coroner's office. One of the doctors overseeing the autopsy, Dr. Melville Rumswell, was reputed to be an abortionist.

Without the uterus and vagina, there was no way of knowing if Virginia had indeed suffered blunt vaginal trauma inflicted by Arbuckle.

Blunt-force trauma would have made a strong case against Arbuckle. But sharp instrument trauma would have cleared Arbuckle and pointed the finger at whoever performed a final, eventually fatal, abortion on Virginia Rappe.

There is also the mystery of why Delmont directed suspicion toward Arbuckle. She was a blackmailer. Why didn't she milk Arbuckle for money? Why didn't she simply allow the police to investigate the death of the young women? To these questions, we can add two others: Why had Virginia's uterus, ovaries, and vagina been removed and disposed of? And why was Virginia brought to a marginal facility like Wakefield Sanitarium?

One theory that answers the mysteries is this: Perhaps Delmont had a hand in arranging an illegal abortion that ruptured Virginia's bladder. When Virginia took ill, perhaps Delmont directed her to the Sanitarium, where the abortion may well have been performed -- where there would be accomplices who would also have a motive to keep the real reason for Virginia's death secret. And after the girl died, perhaps Delmont concocted the rape story to create a scandal that would divert attention away from herself.

This is, of course, speculation. But since an abortionist could face murder charges if a patient died -- and since an accomplice likewise would face a prison sentence -- it's the only scenario that explains the otherwise inexplicable behavior of Delmont and whoever got rid of Virginia's uterus and vagina.

During the first two thirds of the 20th Century, while abortion was still illegal, there was a massive drop in maternal mortality, including mortality from abortion. Most researches attribute this plunge to improvements in public health and hygiene, the development of blood transfusion techniques, and the introduction of antibiotics. Learn more here.


For more on pre-legalization abortion, see The Bad Old Days of Abortion